I use electrical cable – it’s easy to coiled, so it can go a long way inside the shell and it won’t mark the inside of the shell as the cable isolation is plastic.

I made the mistake of using a wire and it scratched and marked all the inside.

I used all sizes of cables and I used telephone cable for very small shells,dental interspace brushes glide does a good job for Trivia shells.

Once the shell is clean and empty and you have saved the operculum, you can clean the outside by putting them in pure bleach. It will get rid of some fine encrustation and algae but for tough encrustation you will have to scrap with different size needles, a knife, scalpel, and a dental baylor scalars.

Once you have done the hard work put the shell in the bleach.

The stronger the better as it will take the flaky, fibrous skin called periostracum in short period of time.

I once put 50/50 water/bleach for 24hrs and it dull the inside shine of a Strombus gigas.

Any nacreous shells should not be too long in the bleach a minute or two and for Haliotis per example Haliotis fulgens has organic marking inside and it is correct to leave it.

To keep the bleach off the markings inside the Haliotis you can rub some thick animal fat. I use a bar of soap but I keep an eye on it as it will dissolve but not as fast as the cleaning on the outside by the bleach. You can try with oil.

To bring back the colors of the shells I use Chloridric acid I poor just few drops on cotton then I press the cotton on to the shell that way I can control the among of acid and not over done it.

You can do that also for the nacre inside shells like Turbo and Haliotis shells in case the nacre has white chalky patches.

To get rid off the stain rust on some seashells I use rust stain remover.

I poor some in a sealed plastic bag put the shell inside and I seal the bag so the rust stain remover doesn’t evaporated the cleaning takes long time few hours depend the size of the shell my shells were small Nassarius and took 4 to 6 hours. 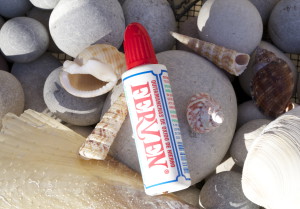